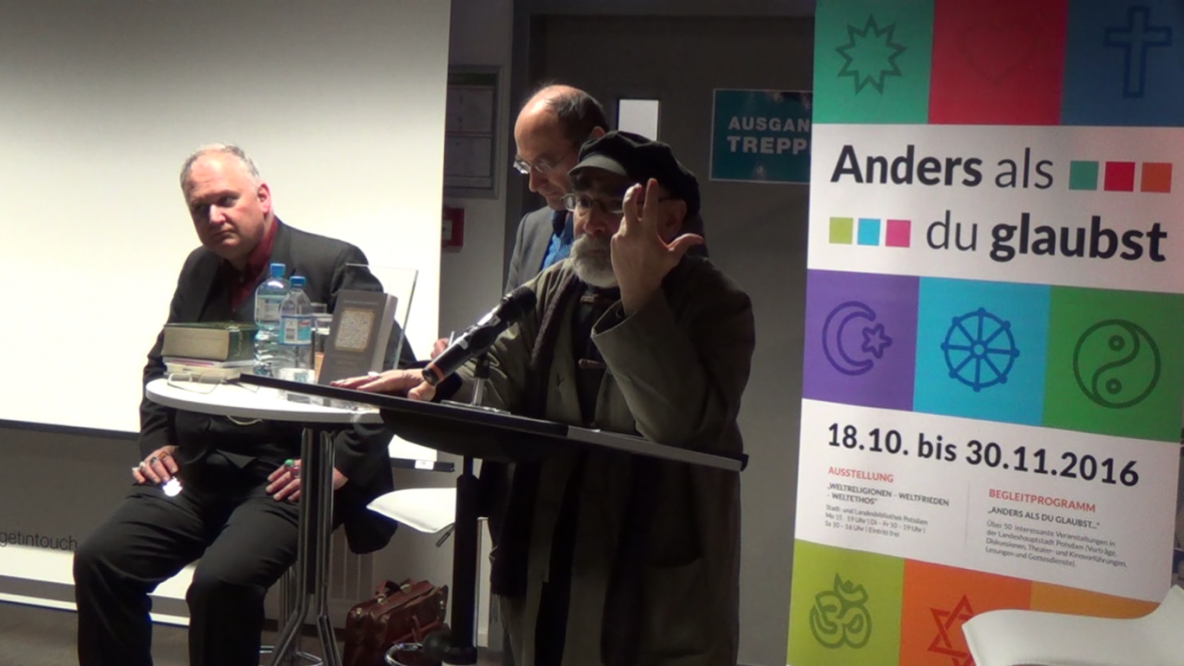 On Friday, November 25, 2016 Dr. Seyed Mostafa Azmayesh delivered a lecture on the compatibility of the quranic wisdom with the modern human rights charter in Potsdam. Islam-ol Madani and Islam-ol Badawi. He was invited by the university of Potsdam, department of religions and the association Karamat e.V. to present his research in the frame of an exhibition supported by the mayor of Potsdam, Mr. Jann Jakobs, and the President of the region of Brandenburg, Mr. Manfred Stolpe. The exhibition focusses on the variety of religions and introduces their core values and traditions in a visual way. Potsdam is reknown for its dedication to tolerance, since the elector of Brandenburg released the edict of tolerance in 1685, decreeing tolerance towards all different immigrants to his region.

In his lecture and dialogue with the audience Dr. Azmayesh explained the difference between the quranic Islam which he regards as being the original one and the Islam based on revâyat (sayings attributed to Prophet Mohammed) invented by the clergy throughout the centuries beginning in the time of the Omayyad dynasty. This Islam based on revâyat is the continuity of values practiced by many Beduins on the Arabian Peninsula. The clergy put away the necessity of studying the Quran and replaced it more and more by the study of Hadith, Akhbar, Revâyat.

Whereas the Islam based on feqh (Interpretations of the Jurists) and sayings (Revâyat) does not respect the values of the human rights and ends up with killing people, mutilating bodies and other atrocities which are being committed in the name of God.

Azmayesh claimed that the Islam-version based on the Quran has four pillars, which describe the inner soul of the teachings: Humans have a journey of transformation on the path of substantial evolution during their existence in the physical sphere. Thus the four pillars of this developmental process are the stage of a fetus (Janin), the discovering of the mission on earth of each individual and the transformation of the universe (Jehân), the work towards more mature stages of existence until the perfected man/woman (Janân) and the approach to the creator (Yazdân).

Finally Azmayesh held that the Quran is not a religious book, as it has been said to the world again and again. According to Azmayesh Mohammeds mission was to bring a change of paradigms and orientation into the lives of the nomadic people of the Arabian deserts and the Quran’s deepest layer reveal that Mohammed intended to build up a civilization according to the model of David and Salomon based on social contracts between individuals with a free will in contrast to the intentions of the later clergy that tried to gather the people behind “divine” laws that need to be obeyed.

The dialogue with the audience helped to clarify better the consequences of these insights for our current life. For a huge part of the audience there were some inspiring aspects and consequentially the organizers will consider of setting up some more lectures concerning these deep insights.